14/06/07. We sold the Grande Punto this morning and straight away the guys from the main Fiat/Alfa dealer Mervyn Stewarts came up trumps as usual with this little gem. Lorna has had 3 156's and although we were after a Sportwagon this one was to good to pass. Late 2004 Veloce, Briliant blue Metalic, black leather interior, 17" wheels and only 44K. Not only that but it has just been serviced including timing belt. It is completely immaculate inside and out.... These are the first photos. I took them with the phone and it was raining really hard so will post up proper ones once we pick the car up. Needless to say Lorna is over the moon. Big thank you to the guys at MS for putting up with us and the constant phone calls all day

Richard Sinton from Mervyn stewarts hands over the keys to Lorna. I'm not convinced he wanted to let them go though as he seemd to like the car quite a bit himself.

I've nothing to report about the car so far apart from it's a great car to drive. I took this photo in the carpark of the American Folk park in Tyrone and just thought I'd put it on the page as it looks well.

12/01/08. I noticed the last couple of weeks that the temp guage was reading very low and the heater isn't as warm as it should be. Suspecting it was the thermostate I bought one from the Alfa dealers.

It took about 25 minutes to replace the old one as it's easy to get at and is held on with 2 13mm bolts. Getting the clips off the pipework was probably the hardest bit to do. Once done the temp guage is back to were it should be and the warms up really well now.  As the cars approaching 50,000 miles now the next job will be to replace the timing belt and camshaft variator.

16/02/08. Lornas Alfa has been in need of a bit of a polish due to the recent bad weather, so into the garage today for a thorough clean.

This is just some of the stuff I use to carry out a complete polish on the body. Everyone has their own way of doing things and this is what works for me..  I start off by washing the car and drying it off. Next is to use G3 which is a fine abrasive compound to take scratches out. What I do is spray a small area of the car with water and then rub some of the G3 on with a lint cloth. Then using the blue buff (medium sponge pad) buff of the area. I normally start off with the roof as there is a lot G3 dust that flies about. Once the entire rof has been done I then use Trade Polish over the roof with another buff with a soft (red sponge). The trade polish takes away any residue left by the G3. The only thing is you can only use it in small areas at a time as it dries vey quickly and makes it had to buff off. When the roof done I move on to the bonnet and round each panel leading away from the bonnet. Now when I get 2 panels away (if I'm on the rear door) I take Maguires polish and do the front wing, leaving it on as I move round the car until the entire car is finished. So so far the entire body has been done with a coat of G3, a coat of trade polish, and a coat of Maguires polish. Once the Maguires is rubbed off I then go round the body again with 1 Grand polish and buff it off. Finally after all that is done I use Maguires sealer to seal the polish in... Glass next and I use glass cleaner on all the glass. I then put 3 coats of Rain X on all the glass bar the windscreen and using water clean it to a shing finish. It takes almost a day and a half to do the job and thats only the body. I've still to do the wheels. I do this with all my cars that have good paint.

18/02. After 13 hours polishing the car was done. Photos don't show just how well the result was but it's like a new car.

17/07/08. Although the Mot is not up until next week I took a chance and booked the car in today to see if it needed anything for it's first Mot. All I did was wash it underneath. It passed with not even an advisory. Excellent. I'm pleased at that.

21/10. The car has now hit 55K so needed timing belt fitted. My mate Aiden offered to put the belt on along with the tensioner and a variator. The car came back today after having it fitted over the weekend.

Fitting the new front discs and pads was first on the list. Caliper has to come off first. It is held on with 2 17mm bolts. (I'm pointing to one of them. the caliper should just pull off once both bolts are removed.

Next the 12mm locating bolt has to be removed. The disc will need gentle tapping to get it to release.

Fit the new disc and bolt on the locating bolt.

Push off the old pads, they just prise out.

You will needs to wind the piston right in for the new pads to fit. I use a large G clamp. I find the flat part almost always fits nicely into the piston recess and you can wind it in very slowly keeping an eye that brake fluid is not pushed out the top of the brake fluid bottle. It also winds the piston in evenly.

One of the pads has a spring metal on the back of it to locate into the piston. It's a straight forward push on to get it in but make sure it has went all the way in as the caliper won't go on past the disc if it's not fully in.

That's the front done. To remove the rear discs it's pretty much the same way although you don't need to remove the caliper frame (that's what I call it). I took off the top bolt (the one in the first photo) but I only released the bottom one off enough to get the caliper itself off.

You can see in this photo if you look to were I'm pointing the bottom bolt is at the back of the frame and is still on. The reason I never tried to take it all the way out is because it fouls on the rear suspension arm and won't go past it. it doesn't matter because once you have the 12mm locating bolt off (same as the front disc) the disc easily comes off past the frame. Every thing else is exactly as you'd do the front so there's little point me posting up more photo's.

12/07. Just realised the MOT is up on the 18th so I went on line to book the test and got it for 19.55 tonight! Not much time then to give the car the once over. I think the air flow meter is on it's way out so first job was to replace it. 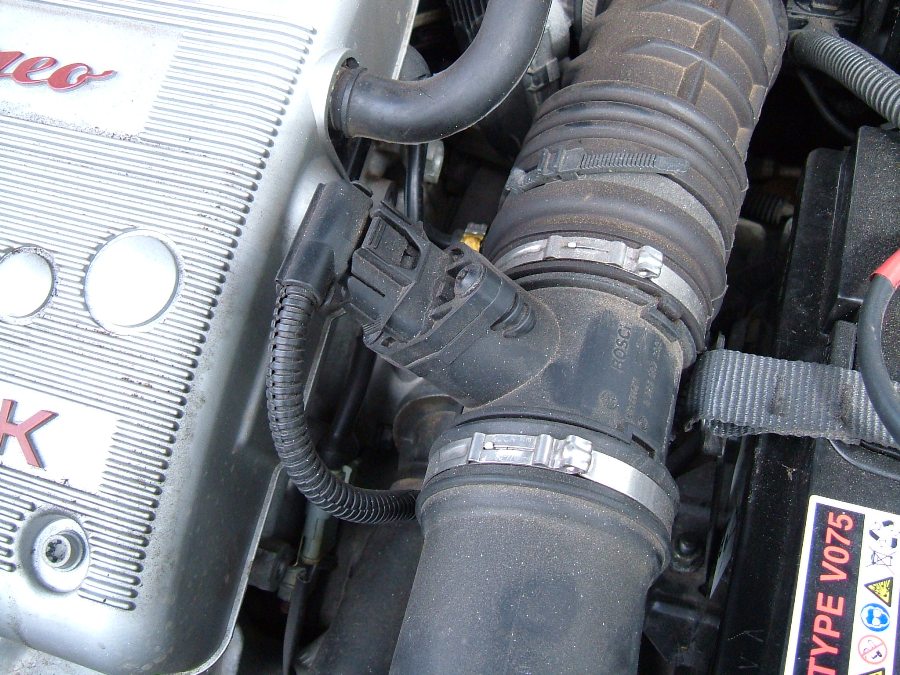 It's straight forward apart from the 2 screws that hold it on. They are hexi heads but have a little tip in the middle of them to make it that you should be able only to remove them using a proper tool. I've did the job on various 156's and all you need to get them out is a good set of grips. Just get a good grip and twist. 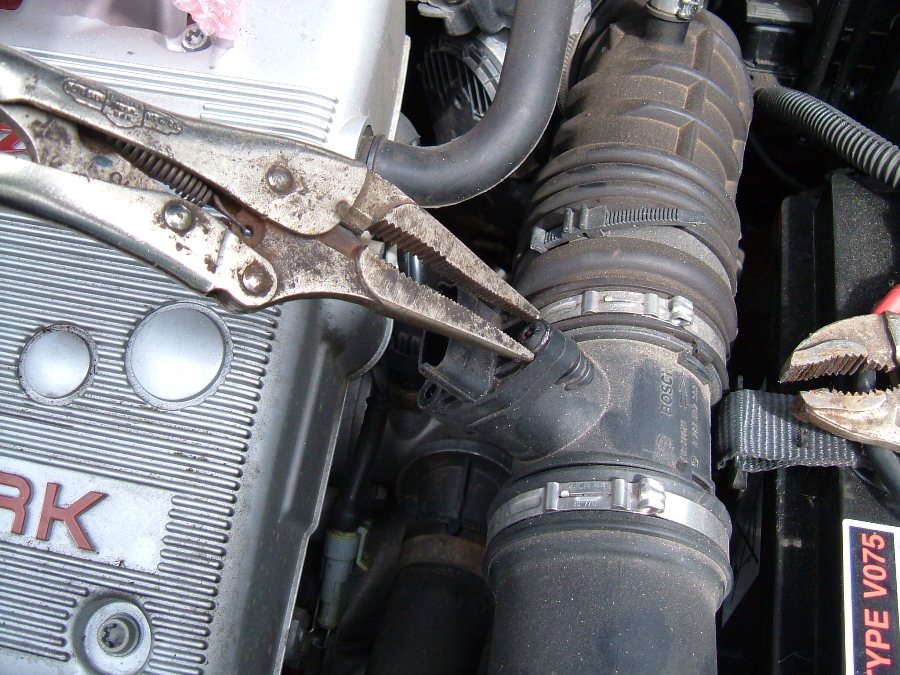 Next job was to replace the spark plugs as the car is almost at 60K. TS plugs are supposed to be changed at 60k and there are 8 of them. A full set costs around £75 not £120 each as a dealer told a friend last week. The coil packs and plates have to come off to get the plugs out. It takes about 20 minutes to change them. More from taking covers off than actually removing the plugs. 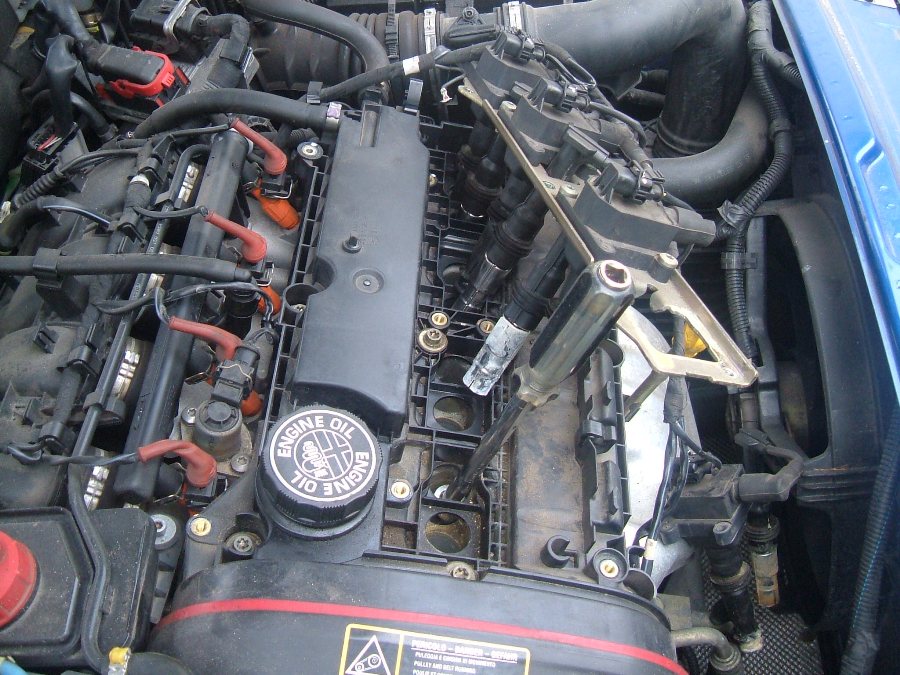 Last job of the day before mot time was to get the underneath washed. ff I went to the guy who does all my cars. He's very thourough and gets virtually every bit of dirt from anywere he can. Underneath was like new by the time he'd finished. 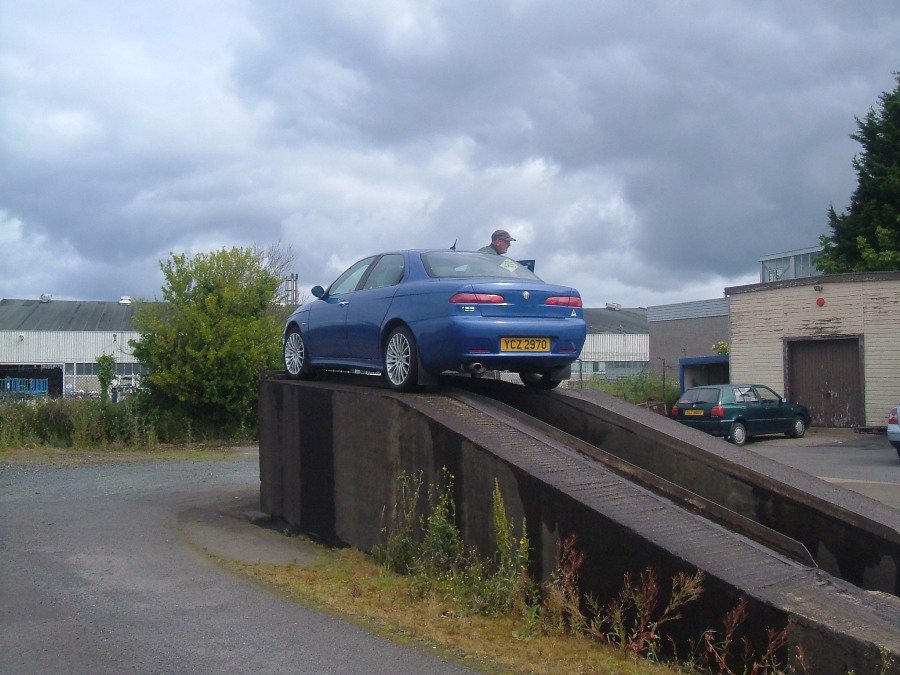 I was the last car of the day to go through the test but that didn't mean they were easy on me to get away home. Everything was checked and as what seems to be the norm of late, no issues were found with the car. A nice new mot cert was issued. Job done. 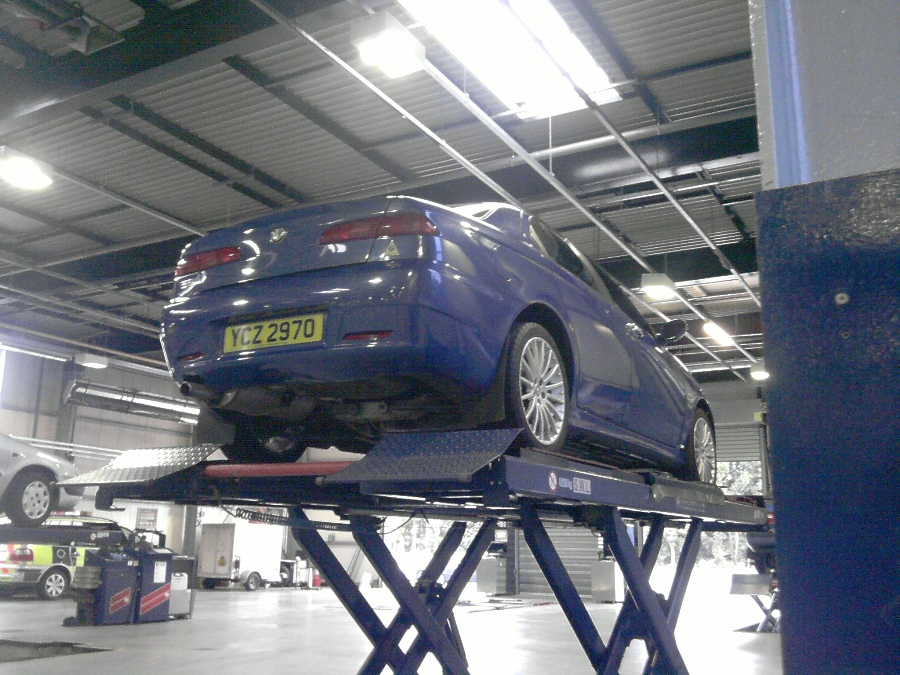 31/07/09. Unfortunately and very regretfully we have had to sell the car today as my Wife really needs an Auto. I know the car has gone to a great home but still felt very sad as it went through the gates. It was one of my favourite cars and one I'll miss.