The story of this car goes way back to April 2007 when the owner Anna contacted me and asked if I would value her car. When I went to see the car it had been sitting for at least a year without turning a wheel and it was a little worse for wear unfortunately. The doors were rusting at their tops and their bottoms. The rear wing were badly rusting at the arches and at the top of the wing, so badly the hood had pulled away from the wings on both sides. The inner wings in the engine bay right at the bulkhead were badly rusting to. And that all was just for beginers. I didn't dare even look at the underneath of the car. On the plus side the roof, bonnet, boot and interior weren't in bad shape.

Next doors cat had made a bed in the cars drivers seat!

After looking over the car and realising just how much work was required (full strip down to the shell to try and cut out all rust) I told Anna that really the car was only god for selling for parts. It pained me to do so because I hate to see Fiats this rare ending their days as a parts car. Anna felt the same way to and the last thing she wanted was the car to be broken up. Her tears proved it. I left the car in the hope that someone would by it and spend the time putting it back on the road.

we come right up to the present March 08. And I got a phone call from Anna offering me the car, on one condition, that I promise to restore it and get it back onto the road. Once she explained her reasons why, I couldn't refuse, and today 11/03/08 with my mate Graham and his trusty Range Rover we went to pick it up. The poor thing was now sporting a smashed windscreen and flat tyres. It didn't take us long to have the front tryes full of air but the compressor wouldn't stretch to the rears. Anna said the car car hadn't been started in about a year and a half (and her neighbour shouted over the fence that it would never go). But it's a Fiat and say what you want, their engines don't give up easily so I poured a little petrol into the carb, put the Jump leads on and turned the engine. "Click click". The starter was ceased. Nothing a good thump of with the hammer won't sort out. Turn the key again and....... first go, the engine kicked into life, no missing, no ruff idle, not even any smoke from the exhaust. Fantastic. I looked over to Anna and she was in a flood of tears. I know how much the car means to her. So not to cause any damage by letting the engine heat up (there was no water in the radiator) I turned it off and we pushed it out of the drive so we could get it onto the A frame.

We got the rear tyres blew up and attatched the A frame.

We said our goodbyes and I promised Anna that I will do my best to have the car looking as new as I can with my limited capabilities.  Grahame then set off with Sylvia and me following, just in case.

We towed the car to My mate Jims house as he's very kindly offered to look after it until I have room for it, (it's the reason I'm selling the Spider). I proudly steered it to were it will rest for a while and put the cover on it to try to protect it until I get it home. (Jim and Grahame were a bit tired from all the pushing though. 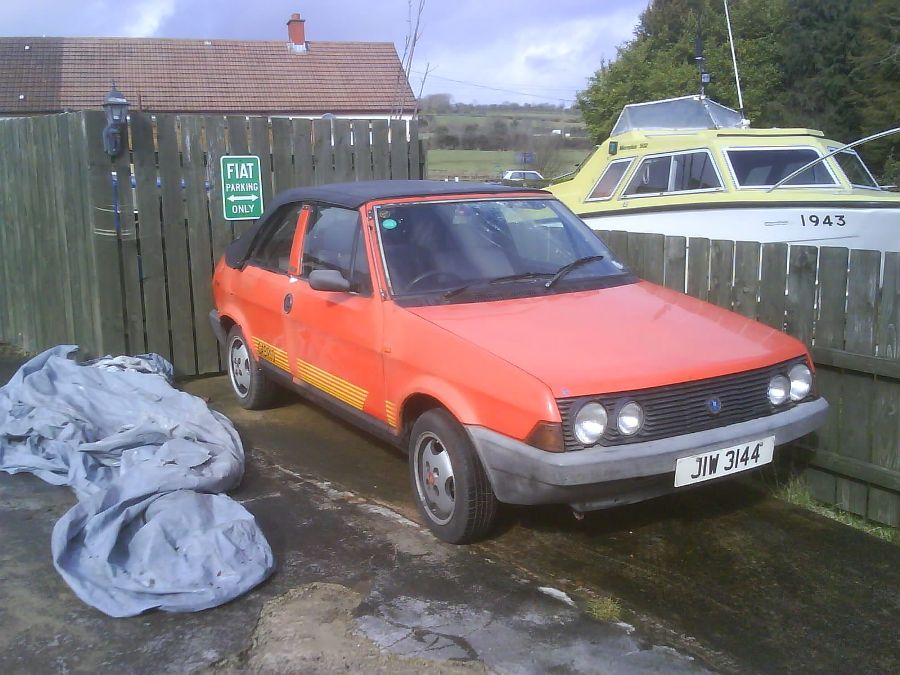 While looking at it and contemplating the work that needs doing to it I decided I can't keep calling it, it, So I am going to name it "Anna" after the lady who has entrusted me with it. She cared a lot for this old rusty Fiat and I will to.

14/05. The first bit I've bought for the car. Rear light lens as the one on the car is broken. Even came in it's original box.

It's so new and shiny I'm going to have to look out for a new one for the other side to make sure they match up.

28/05. Thought I better do a quick update on the car. It has now been put into storage in a dry shed. I've no idea when I will get started to it but it's clear the car now needs a very full restoration.

Inside of the bonnet.

Top of the pass rear wing.

23/01. Well finally let the Strada go. Enda the new owner has promised to restore the car and already has parts bought for it. So I'm happy with that. So off it went today.